Much of our work uses shoot stem cells as a model to understand stem cell regulation. Shoot stem cells are located at growing shoot tips and flowers in structures termed meristems, or stem cell niches. In these meristems, stem cells depend on signal exchange between the stem cells and neighboring cells for their continued production.  These signals include peptides and different hormones, most notably auxin and cytokinin, which integrate with each other to balance stem cell differentiation and division. 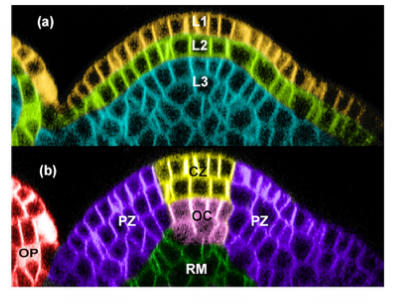 
​Structure of the Arabidopsis shoot meristem/stem cell niche. A) The stem cell niche is composed of layers of cells. L1 and L2 cell layers divide sideways. L3 cell layer divisions are variable.  Imposed upon this layered template is a zonation determined by the expression of specific genes B) CZ central zone, the location of the stem cell niche. OC, organizing center. RM, rib meristem which gives rise to internal shoot tissues, PZ, peripheral zone.  Cells displaced into the PZ may enter a pathway to become lateral organs such as leaves or flowers. They start as organ primordia (OP) on the flanks of the stem cell niche.
The receptor kinase CLAVATA1 (CLV1) and its peptide ligand CLAVATA3 (CLV3p) control the size of the stem cell pool in shoot and floral meristems.  Mutations in either of these genes results in over-proliferation of stem cells giving rise to plants with enlarged shoots and increased floral organ number.
CLV3p is produced by stem cells and processed in the extracellular space to a 13 amino acid peptide that diffuses into underlying cell layers where it activates CLV1 signaling. How CLV1 signals to control stem cell proliferation is unknown but it is thought that CLV1 dampens the expression of the stem cell promoting transcriptional regulator WUSCHEL.  Several projects in our lab are aimed at uncovering the signaling pathways and transcriptional outputs that operate downstream of CLV1. ​
Genetic evidence suggests that CLV1 may co-operate with other receptors in the perception of CLV3p. These included potential co-receptors such as CLAVATA2 (CLV2) and the inactive kinase CORYNE (CRN) and other receptor kinases. Understanding the distinct and shared functions of these receptors is another focus of our lab.  CLV1, CLV3 and WUSCHEL are part of larger gene families that are expressed in different tissues throughout development.  It is becoming clear that different members of these gene families contribute to stem cell regulation and development in other tissues of the plant. How these genes function throughout development is unknown. These gene families are conserved in different plant species ranging from Arabidopsis, rice, and even down to moss. How the functions of these genes have been shaped by evolution to give rise to the diversity of plant form and function is a long term interest of our lab. We have projects aimed at studying the function of these gene families that combine many methods, including genome editing with the Cas9/CRISPR system to mutate genes and examine the consequence of their loss on plant development. ​
Powered by